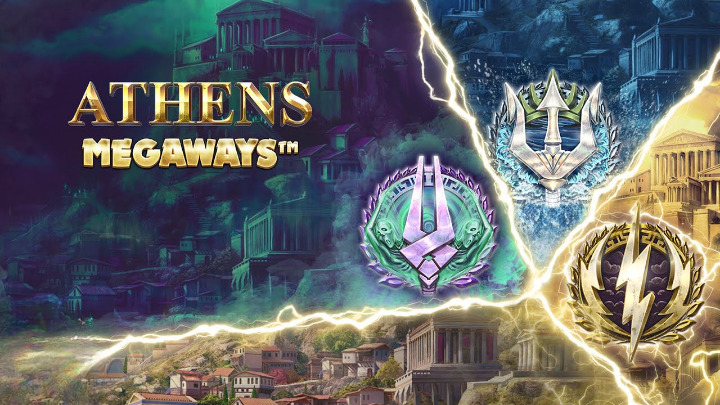 The city of Athens is one of the greek historical areas that’s famous and full of great stories. The city boasts unique artworks, architecture, and culture, making it a great tourist destination. The developer of this slot, Red Tiger, used this city as an inspiration to bring players up to date on past happenings.

The slot has a romantic ancient Greek scene after undergoing digital paint brushing. The set also includes a hillside with unique columned buildings, sailing boats, an aqueduct, and mountains. The setting creates a relaxing scene good for enjoyment after a long day full of challenges. However, the slot doesn’t create the perfect Athens feel through the pictures or recreations. Instead, it has more of the Assassin’s Creed Odyssey vibe.

The Athens Megaways is a creative slot with exciting scenes that infuse ancient civilization. It takes place on a grid with six reels and 2 to 7 rows with 64 to 117,649 ways to win. To play, a player has to place a bet of 10 p/c to 100 euros per spin using any device. It’s a medium/highly volatile slot with an RTP of 95.68%.

Whenever winning ways appear, the symbols are removed and replaced by a cascade mechanic where other symbols replace them. The cascade only stops if no new win appears. To win, a player needs to hit matching symbols on the adjacent reels from the first reel onwards. The low pay symbols are the five greek letters the delta, Psi, Theta, and omega, worth 0.4-0.8x the bet. The high pays are the lyres, shields, plumed helmets, drinking instruments, and pots worth 1-3x the bet.

Soul pit- Souls randomly rise from hades and land as wild symbols on any of the four reels at the center. When this happens, it can result in 2 to 9 wild symbols.

Sea fury- Posedoin earns super wilds on one of the four reels in the middle. A maximum of 3 super wilds can appear per round with a multiplier of x2 to x7.

Olympus blessing- Zeus randomly awards a multiplier reflecting all wins on the current spin. The multiplier values range from x2 to x5 and can increase by +1 after every cascade. The multiplier is worth x20 and is removed at the end of the round.

Note that the multiplier can’t reset in between free spins. Additionally, any multiplier that appears when the Olympus fury is active is part of the win multiplier value. But it can increase to x20. The scatters that land during this feature gets an additional free spin.

Just like a citizen of the famous Athens, Socrates says every person has a sun that enables them to shine, so does this slot allow players to win. The slot has a unique blend of modern and ancient features, which makes it worth a try. It’s a slot to help players reminisce about the old city with great cultures and people. But the developer used some mechanics that resemble those of Piggy Riches Megaways or the Kulta Jaska.

The visuals are appealing and help keep a player busy throughout the session. The maximum win is also a plus. This is despite the developer sticking to its usual progressive win multiplier. The maximum win stands at 19,992x the bet, increasing the chances of a player earning more.

Generally, Athens Megaways is a good slot worth a player’s time. It competes with other slots within its range, like the 300 Shields Mighty Ways, proving its high quality. It’s a well-organized slot with a serene gaming environment and unique characters. However, some shared aspects can make one question its creativity. Additionally, its name doesn’t bring out any civilization aspect that the game entails.