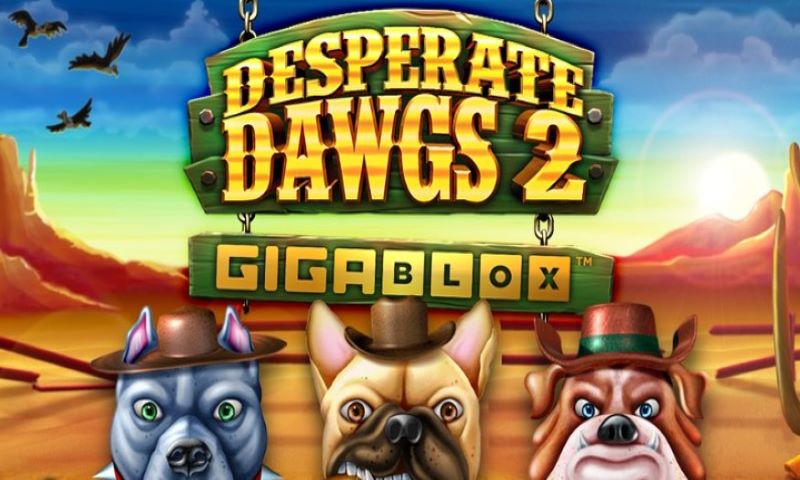 The developers of Desperate Dawgs made changes by introducing 2 Gigablox, which has overtaken the UI and Past Reflex Gaming slots menu system with dated Windows 93.  It has better-modernized visuals, which makes it enjoyable to play. However, this slot isn’t appealing to the western market like Dead or Alive 2. But this doesn’t mean it’s a bad slot, as it pays well.

To bet, you need a bet of between 10 p/c and 100 per spin. A player can bet on their phone, tablet, or desktop. It’s high/medium volatile and takes place on a grid with six reels, four rows, and 40 paylines. The slot also has different RTP models, the highest being 95.5%.

Additionally, this slot has various symbols which form after Gigablox, and reels combine different sizes starting from 2×2 to 6×6. When the big Gigablox symbols break to form regular symbols, it helps calculate the payout. The low-pay symbols include spades, clubs, hearts, and diamonds, while the high-pay symbols are pistols, the game’s logo, hats, and badges.

Hitting a six-of-a-kind winning line is worth 0.8 to 1x the bet for the low-pay symbols. However, the payout for high pay is 2-4x the bet. If a player lands a line of six wilds, it will earn 5x the bet. The good thing about the wilds is that they can substitute for all the pay symbols.

The great features that make this slot worth a try are the scatter symbols, including the yellow gunslinger, a green bad boy, and a red train robber. The unique thing about these scatters is that only one type can land during a spin. When a player lands six or more scatters, it will trigger a bonus round.

Every wagon that appears can bear gold, dynamite, a blank space, silver, or notes. Gold, notes, or silver are worth 10x, 2x, or 5x the bet. Note that the dynamites add to the total value of the dynamite trail.

After a dynamite trail ends, one of the four silver or gold safes reveals its value. But the silver safes require two dynamites to earn 30x the bet. On the other hand, the gold safe requires five dynamites to make 200x the stake.

To trigger the gunslinger bonus, a player should land six or more yellow scatters. The number of triggered scatters earned will equal the number of shots a player makes. But before this feature activates, a player has to select a higher or lower volatility gun, each worth a multiplier.

For example, the lower volatile gun has 1x, two 2x, two 3x, and 4x multipliers, while the higher one is worth five 1x and 10x multipliers. The good news is that every shot chooses one value and a multiplier that gets applied to the value.

If a player lands six or more scatters in a view, it will trigger the bad boy bonus. The player will get free spins equivalent to the number of scatters awarded. However, when a win happens, it will activate one extra row and 15 additional paylines on the grid. After the new win forms on the expanded grid, they will be paid and earn 2+ free spins. The reels can expand to size 6×8 with 100 paylines, and a Giga reel can also appear on every free spin.

The golden bet button enables players to increase their bet by 50%. This helps them to boost the possibility of triggering any of the bonuses.

The Desperate Dawgs 2 Gigablox slot has better visuals after the UI updates. This makes it worth a player’s time as it looks attractive. It also has better graphics than the previous slots, which can be attributed to the introduction of the Gigablox mechanic.

Additionally, the features are good. For example, the bad boy bonus makes the grid expand the reels and win ways. The other bonuses are attractive and pay well, while the maximum win of 9,872x the bet increased from the previous versions.

The developers of this slot did well with this game, unlike the other slots with similar themes. It’s nicer, modern, and pays well. It’s a game anyone should try to get a newer experience and earn more. It’s also entertaining and full of life, as every online slot should.