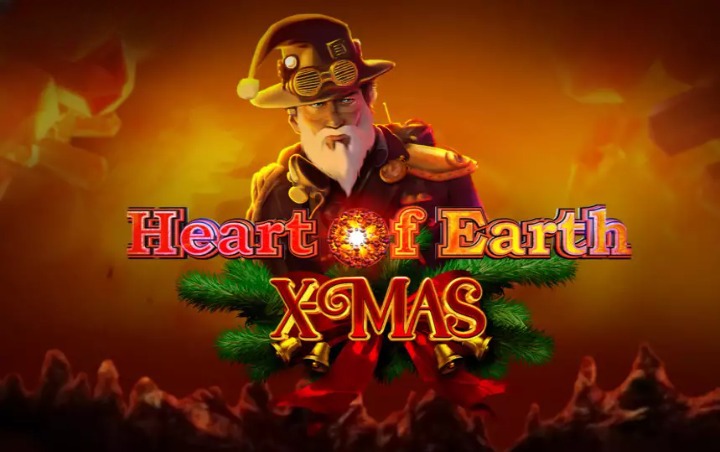 Even if someone spends most of his time underground, he still deserves to experience some holiday cheer. That appears to be the concept behind Heart of Earth Xmas, a slot machine with typical holiday decorations scattered across the gaming area along with symbols that appear to be part of an underground society in the steampunk style. Swintt released it.

Only 5 active lines are available on the 5×3 reels of Heart of Earth Xmas. The highest reward of 5,000 times the bet appears all the more spectacular in light of the slot’s mild volatility and RTP ceiling of 94.91%. We get mixed scatter/wild symbols from the Book-style features, as well as free spins with growing Lucky symbols.

This slot machine allows you to start playing with a very little wager of just $0.05. A larger wager might reach $100.

Heart of Earth Xmas can pay significantly more than expected, especially when you consider the mild volatility that has been predicted. On the other hand, the RTP is also quite low and, even in the best instance, only reaches 94.92%. Up to 5,000 times your wager could be awarded to you as the top prize.

If we’re talking about features, the only significant symbol in Heart of Earth Xmas is the one that serves as both a scatter and a wild. In typical Book-style, this symbol can be helpful when it appears on the reels in odd places, but you don’t often get to employ the substitution feature.

This is due to the fact that whenever this symbol appears on three or more reels, it activates the main feature, which consists of 10 free spins.

A randomly selected Lucky Symbol from the list of standard symbols is used during the free spins. Now that it has expanded, the Lucky symbol can take up the entire reel. Even if it’s not connected, if you acquire it on three reels, combos will form on all active lines. Retriggering more free spins is possible.

Heart of Earth Xmas’ main character seems to be an elderly miner who lives underground and works with a mining apparatus designed in the Steampunk style. It resembles a device from a Jules Verne novel, one that could transport you to the center of the planet. Along with the five low-value Royals, there are other pictures of a miner, a digging machine, three golden statues, and a compass. Christmas-themed decorations are scattered here and there, but they lack much impact.

Heart of Earth Xmas might make an effort to provide you with a slot with a Christmas theme and mechanics similar to those in a book, but in the end it falls short. The RTP is low, so this game’s outdated aesthetics aren’t the only thing that can turn you off.