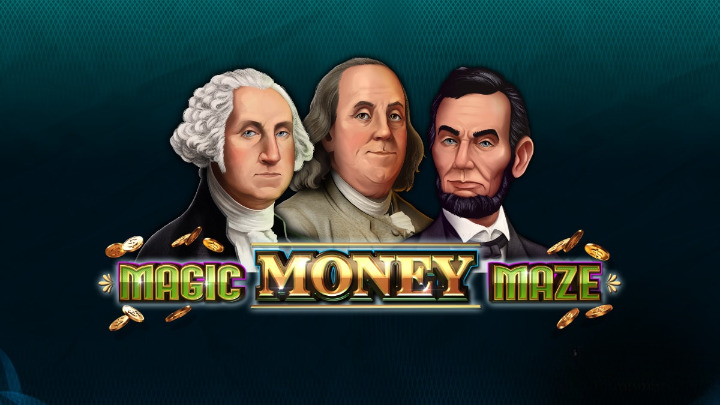 When you watch Patrick Swayze and Keanu Reeves rob banks in the movie Point Break or play Pragmatic Play and affiliate studio Reel Kingdom’s Magic Money Maze, you can be amused by a collection of former US presidents. There might be others, but for now, let’s stick with this. In Magic Money Maze, a game with a real money maze-like contraption as its centrepiece, players are accompanied by a quartet of former presidents as they try to win. However, it would be a stretch to describe it as magical.

According to statistics, Magic Money Maze is a very volatile slot machine with three different RTP options. Its maximum RTP is 96.61 percent, while the other two options are 95.51 percent and 94.53 percent. In the standard game, matching symbols must appear on adjacent reels starting from the left-most side in order to pay out. Most symbols require at least three of a kind, with the exception of the top premium symbol, which pays for two of a kind. Each paid gaming round costs 10p to £/€250, and players can access the action on desktop, tablet, and mobile devices.

Starting on the lower end of the paytable are the 10, J, Q, K, and A icons, which pay 10–20 times the bet when five of them appear on a payline. The next four presidents in line are “Honest Abe” Abraham Lincoln, Alexander Hamilton, Benjamin Franklin, and George Washington. These are the high-paying cards, where five of a kind is worth 50–200 times the initial bet. Although there isn’t a wild sign, there is a money symbol that is depicted as a stack of bills with a value ranging from 0.1 to 1,000 times the stake. While getting five of the same symbols on a payline pays their face values, getting three or four of them awards 3x or 15x the wager. Next is the bonus game, where prizes can also include money symbols.

The key to the bonus game is the Magic Money Maze logo symbol. The Magic Money Maze Board Bonus is triggered by landing 3, 4, or 5 of these Bonus symbols, with 1, 2, or 4 lives, respectively. 49 squares make up the 7×7 gaming board used for the bonus round. Players rotate their token around the board clockwise after rolling the dice. The squares show either empty spaces or one of the following:

The round’s prize pool is increased with cash prizes ranging from 0.1 to 1,000 times the wager.

Players move where the arrows indicate.

Snake: takes a life away.

The multiplier grows each time you reach the middle of the board, increasing the money symbol values by x2, x3, x4, x5, and x10, respectively. Players keep going around the board until they run out of lives. Players then return to the main game after receiving any winnings that have accumulated in the reward pot.

Last but not least, players in eligible jurisdictions might be able to purchase a ticket to the bonus round for a price of 120 times their wager. With at least three Bonus symbols landing in view, this grants you access to a gaming round that will trigger.

Pragmatic Play has given Magic Money Maze a distinctly retro feel in order to capitalise on the historical feeling that the four presidents generate. Before the music shifts to a sort of ragtime style in the bonus round, the base game has a type of Revolutionary War/Continental Army flavour that gives it character. For the time being, players will stick with the base game, which features 5 reels with a gold frame, 3 symbols on each, and 10 ways to win. Coins and bank notes are the main decorative elements, which are dispersed over the screen against a green-and-black backdrop.

Magic Money Maze is an awesome slot with amazing RTP. It is an interesting game for classic game lovers.