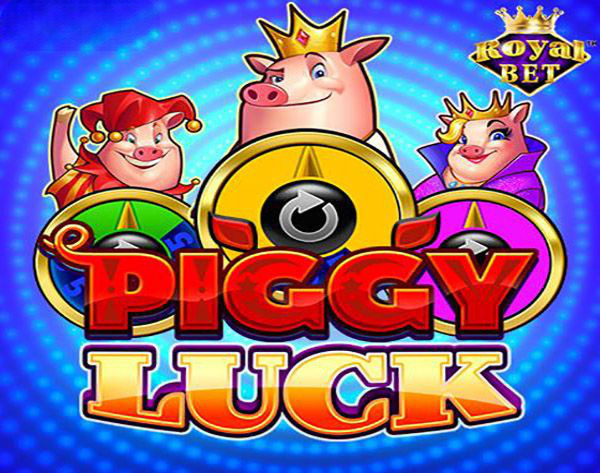 Gong Gaming Technologies’ Piggy Luck has us visiting a king’s court and meeting some of the people that live there. We see the King, Queen, and Jester, but they are all pigs dressed as humans. Though the piggies are the stars of the slot, it has a mediaeval vibe to it.

In this game, you’ll find 5×3 reels as well as 20 paylines. Cash Collect, Golden Path, and Free Spins are the three main features. Although wins of up to 10,000x appear to be feasible, the volatility is modest, and the RTP is 95.12%.

The game looks to allow for wins of up to 10,000x the stake with the Golden Path bonus, which is astounding for a slot machine with such little volatility. RTP isn’t particularly high, at 95.12 percent, as noted in the case.

The Wild symbol is very self-explanatory. As one of the most common special features ever, you get to use this one as a substitute, and it will be useful, if not extremely thrilling. These wilds can pay up to 50x the stake if they form combinations simply among themselves, which is far better than what you can expect from conventional symbols (up to 12.50x).

Piggy King scatters can appear on the middle reels, and if all three are visible, the Golden Path bonus is activated. You spin a wheel to move up a ladder and win as much money as possible. If you receive the Collect notification, the feature will be disabled.

Piggy Queen scatters can also appear on three reels, in columns 3-5. When all of them are visible, you’ll get 15 free spins, with the ability to retrigger them. Piggy Jokers are also scatters, but only on reels 1-3. You can use the Cash Collect feature once they’re all visible. Make picks in order to find multipliers and, finally, a prize to use them on.

When it comes to the Wheel of Luck, you can gather scatter symbols to increase your chances of activating one of the features, but you’ll have to pay 10x your stake to do so. If you collect enough scatters, the feature will activate without you having to pay anything.

As I previously stated, the idea is based on a king’s court, but with a twist: the entire court is made up of pigs. The main elements are inspired by the King, Queen, and Jester, and they’re also some of the symbols you’ll notice, such as the crown, diamond, or star. There are several others, like as the Wild logo, the game logo, and the Royals logo. Piggy Luck’s cartoon-style graphics aren’t extremely complex, but they get the job done.

Piggy Luck isn’t your normal slot machine, which is a good thing because these games compete with thousands of others. The style is a little vintage, but I liked the combination of tremendous potential and minimal volatility.