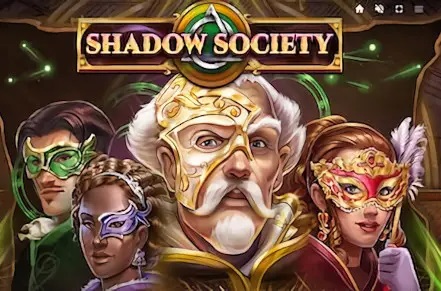 Even though the starting game area is smaller than you may imagine, Shadow Society can ultimately give as many reels as any other game. It has the kind of contemporary concept that many people will enjoy. Red Tiger appears to have spent a lot of time developing this particular slot machine, which has an excellent design and many features. It was inspired by a covert organization whose credo appears to be Progress Brings Prosperity.

At start, Shadow Society has 3×3 reels and 9 lines, but it occasionally expands to 5×5 reels with 25 active lines. A slot machine with extreme volatility and a 95.76% RTP promises wins as high as 1,958 times the round’s wager. The scatters, multipliers, free spins, and reel expansion feature of the game will all be helpful.

Even though it is also quite unstable, Shadow Society has immense potential. The maximum payout is 1,958 times the stake, or up to $198,500 in cash.

Unfortunately, the risk and reward are equal, and substantial volatility is anticipated. The RTP is by no means exceptional, but at 95.76%, it’s also not exactly dismal.

Features of the Shadow Society game

If progress symbols appear in the gaming area, they will be used to move a meter forward. Better symbols become available as you near the Pyramid, and the playing field will grow. There are eight stages total, and each step requires five symbols to be completed. Along the way, you can acquire access to the premium character symbols and eventually reach a playing area with 5×5 reels and 25 lines.

The game demands that you land three Globe scatters on the reels simultaneously in order to activate the free spins feature. The multiplier will increase by 1x for each new win the game grants you.

We see several masked figures on the reels in this slot machine that draws influence from secret societies, but it doesn’t seem like there are enough of them to effectively conceal their identities. Initial reels are 3×3, however other times there may be up to 5×5 symbols displayed. The four characters as well as pictures of a pen and ink, a pocket watch, a gold ring, and a syringe are included in the symbols.

Shadow Society includes the high-quality design you’d expect from Red Tiger, more features than most 3-reel slots, and a transformation that turns it into a contemporary release as it transitions to a 5-reel arrangement. This slot may be a nice choice overall for a player seeking a retro-style aesthetic and low volatility, but there are many other possibilities of that kind that provide higher RTP percentages. Overall, I enjoy the slot machine since it has some interesting bonus features. If you can locate it with the RTP set to the highest setting, it is definitely worth playing and gives about 1,958 times the jackpot per game.